The Romantic era of the piano begins with the nocturnes of John Field, but it is with Frideryk Chopin and Franz Liszt that the romantic music for piano reaches its apogee.

Since when Chopin was young he had been a great fan of Italian Opera and enjoyed close association with singers. He was also involved in a love affair with Konstancja Gladkowska, she studied singing at the Warsaw Conservatory. In 1829, during a university soloist concert, she met Chopin, for whom she became an inspiration.

He wrote to his friend Tytus Woyciechowski on 3 October 1829: "I already have, perhaps unfortunately, my ideal, whom I faithfully serve, without having spoken to her for half a year already, of whom I dream, in remembrance of whom was created the adagio of my concerto, who inspired me to write that little waltz this morning." Under the sway of his feelings for Konstancja, Chopin wrote also the middle movement of his F minor Concerto, Op.21 (Larghetto) and the Waltz in D flat major, Op.70 No.3.

He began to love "belcanto" in his young years in Warsaw where the National Theater, under Kurpinski direction, was entirely Italian.

Fryderyk Chopin in the portrait
by Eugène Delacroix

When Chopin was 20 years old he left Poland. Shortly thereafter, the November Insurrection started. Poland lost its freedom and ceased to exist on the maps of Europe. After moving to Vienna he finally got to Paris, which was the cultural center of the world. Rossini, Bellini, Berlioz, were living there, and from 1828 Liszt too was.

We have a letter that Chopin wrote again to Tytus Woyciechowski (12-12-1831): "...till now I wrote you nothing about Opera. I've never heard the BARBIERE performed as I attended last week with Malibran, Lablache and Rubini. Nor have I ever heard OTELLO performed as by Rubini, Pasta and Lablache, nor ITALIANA IN ALGIERS sung as by Rubini, Lablache and Mme Raimbeaux...They say that Pasta is now a little bit lower than before but I had never seen nothing more sublime than her. The Malibran is fascinating with her marvellous voice e sing like nobody. Wonder! Wonder! Rubini is a perfect tenor, he takes the notes with full voice, never with "falsetto", and sometimes he gargles for two hours...His "mezza voce" (in Italian, n.t.) is incomparable...".

It is hardly surprising ...that Chopin was very early on attracted towards the art of singing, and particularly ...BELCANTO. The great vocal school of the 1830's, in which the art of declamation and its dramatic expression in music were harmoniously united, represented for him the ideal and definitive model for interpretation. It was on the singing styles of RUBINI, of PASTA, that Chopin based his own style of pianistic declamation... (quotation from J.Eigeldinger: Chopin pianist and teacher as seen by his pupils page 14 and 95).

Chopin urged his students to Ieam from the greatest Italian singers, such as Pasta, Rubini, and Grisi, and this, together with his well-documented admiration for Jenny Lind and Henriette Sonntag, confirms that vocal practices of the time, as welI as pianistic practices, are highly connected with each other. In addition, a lesser-known treatise provides some fascinating insights into the continuity of the historical relationship between singing and keyboard playing in nineteenth-century Paris.

Felix Godeftoid's "École chantante du piano" (Paris: Heugel, 186 1) illustrates the extent to which concepts borrowed from singing and the imitation of the voice continued to pervade pianistic thought up to the end of 19th century.

About his nocturne op.9 n.2 Chopin said "as for the style we have to take to model Lady Giuditta Pasta and the great Italian school of singing".

As far as Liszt is concerned Paraphrases and transcriptions from Opera occupy a very important part in Liszt's catalogue of works. Very often they are pages of the highest level. They constitute a corpus that prows around 350 works.

The transcriptions, paraphrase and melodramaticfantasies first ensured the success of a revolutionary initiative, the recital, because until 1839 it was not conceivable that a pianist would show up alone infront of a paying public. Although he decided to playin a non-large room (400-500 seats) The pianist was flanked by a singer or instrumentalist, and if heplayed in a theater he could not do without the orchestra.

Franz Liszt, another of the greatest composers
and interpreters of romantic pianism

Liszt showed up instead in June of 1839, alone, in front of a paying public who was agreed inthe Palace of the Russian Embassy in Rome and, writing to the Princess of Belgiojoso, proudly paraphrased the motto of Louis XIV: "Le concert est moi".

Liszt had a close conncetion with Rome, during his life: coming several times and also living in Rome and participating to Roman musical life.
He was often in Roman halls and theatres to attend Opera in Rome, and premiers and Classical Music concerts in Rome.

The fascination of the great Italian lyric had to touch Liszt's sensibility, during his trip to Italy with Marie D'Agoult in the thirties of the 19th century.

It will be thanks to its paraphrase of the most famous songs of Donizetti, Bellini,Rossini and Verdi that you will reach all the corners of Europe becoming a form of homage to our music.

In this period, the transcriptions were the most effective way to disseminate and publicize the operatic repertoire. Many musicians devoted themselves to it for simply economic reasons.

For Liszt instead, the interest in transcription was born,on one side for the desire to know more closely the compositional style of the authors and on the other,to explore the infinite possibilities of the piano in which he tried to transpose all the sounds of the orchestra.

Verdi's works also animated his transcriptions from "Lombardi" to "Boccanegra's réminiscences" to paraphrase of "Rigoletto" written eight years after the premiere of the opera and which is based on the famous Quartet of act III "Beautiful daughter of love". All these Verdian arias are treated with great compositional mastery, but also with intense sharing and participation in the Verdian musical message. But also Donizetti with "Réminiscences de Lucia de Lammermoor" and Vincenzo Bellini with "Réminiscences of Norma" found perfect position in his articulated musical treatise on Italian Opera.

Thanks to Giovanni Velluti's dual role as accompanist and soloist, RomeOperaConcerts is highly involved in mixturing romantic piano music and opera, also to analyse the mutual influences.
As far as recitals with singers are concerned the standard in the major theaters (Met, La Scala, Covent Garden, etc.) is with orchestra or with piano.
No other ensembles are used, unless particular cases.
A concertizer can make the piano sound as a good substitute of an orchestra.
Learn more about performing Opera Concerts. 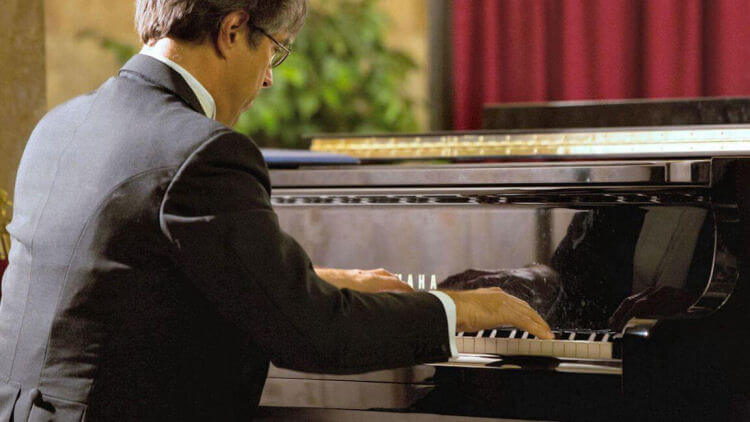 Giovanni Velluti at the piano

At the same time the audience can compare, right after the performance of a vocal piece of music, the way the piano can be played with a "singing style" in a romantic solo piano piece.
The piano is an essential part of the RomeOperaConcerts shows, also considering the forthcoming "Romantic piano solo recital".
The forthcoming recital will be available from the autumn in a few selected dates and will be a "Piano Greatest Hits in Rome" featuring, along with the great classics as Beethoven Moonlight and Patetique sonatas, the virtuoso pieces by Moszkowski and the great Liszt Opera Transcriptions, naturally focusing also on Chopin's works.
Ask for more info about the forthcoming piano concerts in Rome!

After almost two years of business interruption due to Covid-19 and the moving of the concert venue to another area of the city centre, we are finalizing the agreement with a new restaurant.