The 2022 season will start on March 25 with the concert Tosca - highlights & other opera hits.
Complying to the Covid-19 provisions of law, in case of lockdown from foreign countries the tickets will be refunded.

Our musical programs are inspired by the 19th century music salons. They were "closed meetings", very popular since the 18th century in Italy and then in Europe, attended by scholars, artists and intellectual nobles. The artists of the moment were performing in these circles: piano and violin virtuosos, singers, composers of romances and songs were making the musical programs as heterogeneous as possible.

A black Yamaha G2, grand piano built in Japan in 1984, which was Yamaha's finest professional series piano at that time, is in the centre of the common space. It willingly performs and accepts to accompany one or two voices, but hardly ever remains silent. So, you can happen to listen to, among the other things, the following. 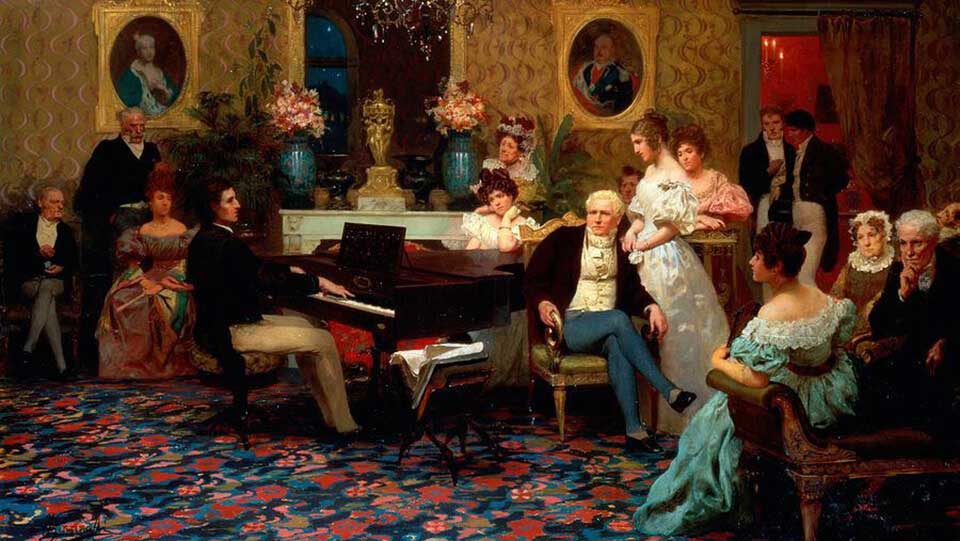 A soprano aria from the opera Gianni Schicchi (1918) by Giacomo Puccini. Lauretta falled in love with Rinuccio, in the general bustle, among the avid relatives dreaming of Buoso Donati's inheritance, she kneels to her father, Gianni Schicchi, asking for having pity of her and for doing something to resolve the situation, that puts his love story at risk.

E lucevan le stelle (And the stars were shining)

A tenor aria from the third act of Giacomo Puccini's opera Tosca (1900). That's the moment in which the painter Mario Cavaradossi is awaiting to be executed for treason on the uppermost platform of the Castel Sant'Angelo in Rome; overwhelmed with memories of the happy days spent with his beloved Tosca, he bids farewell to life in despair.

One of Frédéric Chopin's most beautiful works, which expresses a rare poetic fancy and whose tone poem carries its own individual message to each hearer.

A soprano prayer from the opera Norma (1831) by Vincenzo Bellini, in which the Druid priestess Norma invokes the moon and prays the "chaste goddess" to bring peace onto earth.

A soprano aria from the opera Madama Butterfly (1904) by Giacomo Puccini, in which the title character, seduced and forsaken by her American husband, reassures her servant Suzuki: "one fine day" we shall see his ship entering the harbor and he will return to me... But it's an illusion, because he will be back only to take away with him the baby-child born of their union and Butterfly will commit suicide.

A tenor's song from the beginning of Act 3 of Giuseppe Verdi's opera Rigoletto (1851) where the Duke of Mantua, having forgotten Gilda already and engaging in another amorous adventure, sings about the fickleness of women, expressing his actual cynical contempt for them.

A soprano's aria from the first act of the opera La traviata (1853) by Giuseppe Verdi, in which conflicting feelings in Violetta are stirred up by Alfredo's passionate declaration: whereas on the one hand she longs "to love and be loved", on the other hand, when she realizes that she is getting too involved, Violetta declares that it is just a foolishness and she will not give up her life of pleasure and dissipation.

A tenor aria from Giuseppe Verdi's opera Macbeth (1847): that's the moment in which Macduff, who has left Scotland and Macbeth's reign of terror, mourns the deaths of his wife and children, slaughtered by the tyrant’s killers.

A "night music", as its name implies, a composition of a romantic, dreamy character of which Frédéric Chopin was very fond, judging by his many lovely poetic compositions with this name. We can hear a poignant theme which, swinging immediately into a singing melody, flows continuously through tiny excursions into the minor key, and is caught back to the main motif by lovely phrases of very fast notes, to become once again the smooth, graceful melody.

A duet from the opera La traviata by Giuseppe Verdi, in which Violetta is dying and Alfredo regrets the wrongs he has done her. They dream of leaving Paris and live together a better future.

The popular habanera (Cuban dance of La Habana), an aria from Georges Bizet's opera Carmen (1875), in which the title character tells what is love for her. It is like a rebellious bird, a gipsy child who has never known any law.

Di quella pira (The horrible blaze of that pyre burned, enflamed all of my being!)

A tenor aria sung by Manrico in the third act of Giuseppe Verdi's opera Il trovatore, in which Manrico, who has discovered that his mother Azucena has been captured by the Count of Luna and is about to be burned at the stake, furious calls together his soldiers and sings valiantly of how they will save Azucena from death.

A tenor aria from the opera La forza del destino by Giuseppe Verdi, in which Don Alvaro, best known as Don Federico Herreros, Captain of the Spanish Granadiers, sings of his lost love − Leonora − he believes dead. He decries also the fate that befell his progeny and denied him the throne.

One of the best known fourteen waltzes by the Polish French composer and pianist Frédéric Chopin, consisting of exquisite, rather capricious melodies infused with a gentle melancholy.

Verranno a te sull'aure (My ardent sighs will reach thee)

A love duet at the end of the first act of Gaetano Donizetti's opera Lucia di Lammermoor, as Lucia and Edgardo plight their troth before God and bid each other a tender farewell.

Here is a piece composed for music salons of the nineteenth century, to which many composers devoted themselves. The Paraphrase, also called Fantasia or Reminiscenses (far from being a faithful transcription), is a solo work greatly virtuosic in which popular melodies, typically from operas, are elaborated. This Franz Liszt’s Paraphrase, based on the vocal quartet Bella figlia dell'amore (Beautiful daughter of love) from act 3 of Verdi’s opera Rigoletto, was published in 1860. 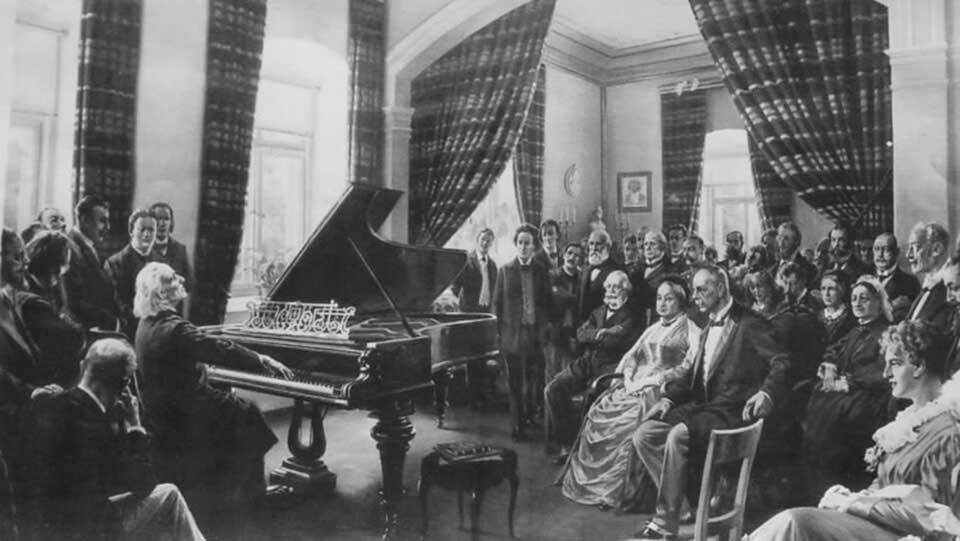 The pianist and composer Franz Liszt (photographed on the piano) during a music salon.

A Neapolitan ditty by Luigi Denza written to commemorate the opening of a new funicular railway in 1880. The success of this catchy melody was simply prodigious: well over a half a million copies were sold (an unheard of amount for those days, and a very respectable number even today) and the lyrics were translated into every civilized language.

A famous duet from Verdi's La traviata, in which the young Alfredo Germont, who has been invited to the party held by Violetta Valéry, a star of the Parisian demi-monde, improvises a toast to love and Violetta responds singing the praises of pleasure and delight.

We thank Massimo Scapin for the text The music salons.